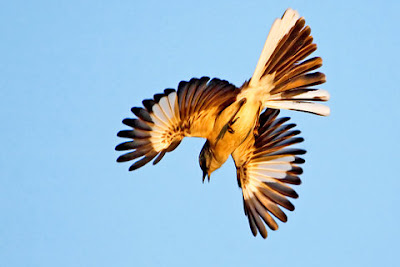 This is me pounding a rhetorical spike into the Terminus of my life (shout out!  Vamos United!)... refusing to pull the ripcord... saying "no" to walking this rapid... telling y'all to hold my beer... employing elocution to close off the emergency exits and escape routes so that there's nowhere left for me to go but downstream with the current.  I've reached a fork in the road and, guided by the wisdom of St Yogi, I'm taking it.

But perhaps we should rewind the VHS tape back a little and provide the proper context... imagine Wayne and Garth doing their flashback dissolve.

You may recall that, towards the end of 2018 in the midst of my life-as-shitstorm saga, I had the burden of employment unceremoniously removed from my daily responsibilities.  I blogged about it in this entry.  At the time I projected a rather sanguine demeanor which belied the feelings of abject terror and panic which one might experience when freefall has commenced sans parachute.  Funny thing is, freefall can actually be a fascinating and rewarding experience if one is able to relax into it.  And I lived the truth that sometimes seemingly catastrophic events unfold into precisely what is needed in the moment.

The absence of a job allowed me the space and time to address the larger matters that were unfolding in my life:  the death of my mother followed by Martina's decline and passing.  Early in the year I made a heroic effort to launch a search for new employment.  It was sporadic at best and the timing was usually awful.  I was on a phone interview when my mom passed away.  I found myself in Maine without cell coverage when I was scheduled to connect with a hiring manager.  Eventually, I realized that it was futile for me to focus on a job search in midst of my reality and I ceased the struggle.

Nevertheless, I "knew" that it was imperative for me to get another W2/corporate gig to cover the next 3-4 years while Oliver finished high school and I retired the majority of my outstanding financial responsibilities.  Simultaneously, an exit strategy was to be developed since I had no intention of staying in the sausage grinder any longer than I had to.  So the working plan was thus:  pause through mid-year, focus on what was right in front of me, and then after the July Fourth weekend, hit the ground running in the search for a new job.  Instead, as it turned out... I simply... HIT the ground... and fractured my ankle. 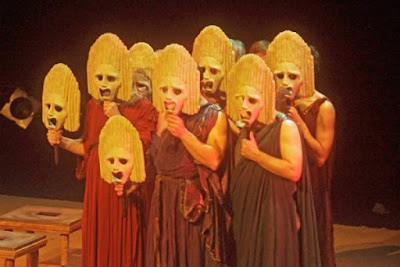 And yet again the Greek Chorus... Such bad luck!  Catastrophe!  Blues, despair, and agony!  OMG, you're having the worst year ever!

Really?  Despite not being thrilled with this new twist of fate (get it?), I was now less sure that my instinctive labeling of events in my life as either "bad" or "good" was very helpful.  Instead, I paused and paid attention.  Yes, having a broken ankle sucks.  But it's also temporary.  And it gives you a much greater appreciation of such things as... for example... being able to walk up steps, standing in a shower, going to pee in the middle of the night without crutches, etc.  We're given so many little gifts in life and only fully understand their value once they're taken away.

Yet through all of this, I stubbornly held onto to my working plan:  find that next W2 gig... go race those rats.  Sure, this most recent setback will delay me a little more... again... but I gotta do what I gotta do... right?  Right???

Here it's probably important to mention that even when I was able to go through the motions of the job hunt, I found that I could bring very little enthusiasm to the effort.  Reviewing job listings, connecting with recruiters, doing the sales song and dance to hiring managers... it all left me feeling rather empty and cold.  I, of course, chose the wise and self-aware course of ignoring those feelings and stubbornly pressing forward because...  I gotta do what I gotta do... right?  Right???

Monday September 16th 2018.  I'm in the back of the Variety Theater with Tinariwen performing.  They're in the midst of spooling out one of their trance-inducing Tuareg jam sessions.  I may or may not have been in a slightly altered state.  Also... have I mentioned before how music acts as a spiritual pathway for me?  Well... in that moment... the infinite reached out and gently bitch-slapped me.  The message was simple, direct, and the truth of it had been in front of me for months:

"Look... you lost your mom in February.  You lost your fiancé in April.  In case I'm not getting through to you, let me lay it out nice and slow... YOU HAVE NO IDEA HOW MUCH TIME YOU HAVE LEFT IN THIS LIFE.  Do you really want to spend the next 3-4 years doing something that you don't like and have no real passion for?  Really???"

Well... since you put it that way.

In that instant, the pieces were rearranged on the board.  The exit strategy became Plan A and I finally let go of the notion that "I gotta do what I gotta do"... because the truth was that I didn't gotta do it.

A confession:  even when the truth hits me in face like that, it often takes me some time to fully trust it (God rolls her eyes).  I had to walk around it, poke at it, tentatively take a step onto it afraid that it would crack like thin ice plummeting me into freezing water beneath.  But it all held.  It was solid.  And once I started trusting it, I could feel the flow begin to take me. 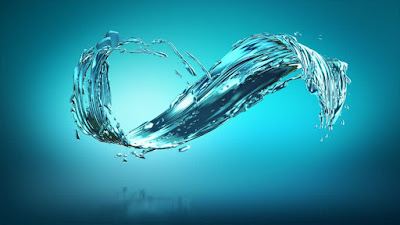 So let's pause and talk about the word "flow" for a moment.  I tend to use it in two different contexts.  The first was articulated by Mihaly Csikszentmihalyi is his book "Flow: The Psychology of Optimal Experience".  In short, flow here refers to being engaged in an activity to the point where the sense of self and the separation between you and the task vanishes... where you're able to get out of your own way and just allow it all to unfold.  The little "you" is no longer struggling to make things happen.  Things just happen and you're there bearing witness to it all.  I've experienced this while kayaking and with musical performance.  It is a state of pure joy.

The second use of the word flow is similar to the first  It applies to the larger context of how life can unfold once you're able to, again, get out of your own way and allow the larger forces to exert their pull.  The Christians have an axiom for it: "Let go and let God".  Well... there it is.  And it's truly astounding how much effort we all put into staying out of the flow.  Why?  Because it's unsettling.  Because it challenges our notion of who we are and what we are "supposed" to be doing.  Because...  “It's a dangerous business, Frodo, going out your door. You step onto the road, and if you don't keep your feet, there's no knowing where you might be swept off to.”  Some of us have to be kicked out that door.

So now that I've decided to engage in this dangerous business, where - you may ask - do I think I'm going?  The answer involves several threads and an intuitive felt sense of place.  Each of these threads are being woven into a path pointing towards a particular locale.  I won't delve too deeply into any of the details as it is still in the formative stages and likely to change and evolve over time.  But this should provide a sense of my motion and direction. 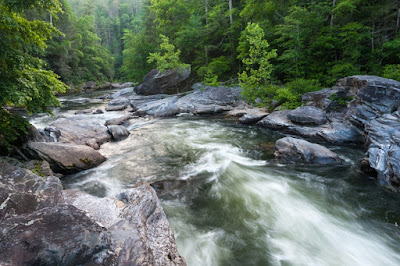 The first thread is a continuation of the vision that Martina and I had:  creating a space for music and community.  It is still something that I wish to carry forward, at least in part, as a piece of her legacy.  The second thread is a shared desire to explore creating an intentional community which evolves over time into senior co-housing.  Much, much more to research and work on here, but just voicing that aspiration has prompted several serendipitous events to occur for me already.  The next thread is the book that has apparently chosen me for its vessel.  Again, not much more to say here until I'm able to get deeper into that process.  And the last thread is a wish to be closer to the environments and activities and communities that I connect with on a deep level.  The confluence of this flow is taking me away from Atlanta and to the foothills of the Appalachian Mountains in Northeast Georgia.

How serious am I about all of this?  I'm working on rearranging assets now to allow me to float financially for a year or two.  My house will go on the market in the next few weeks... that is... unless a certain very motivated buyer doesn't snatch it up first.  I'm planning on taking a part-time job at a local watering hole to learn about the operations of that business.  And... as I've started following the strands of my community's web... it's amazing how many valuable and important connections and resources I've discovered  Yet more flow.

So how will this all unfold?  Like me, you'll have to wait for the next chapter to find out.

I'll leave you with Michael and Cary Ann (aka Shovels and Rope) and the opening battle cry from their recent release By Blood.  Wishing all of you your own "metamorphosis".